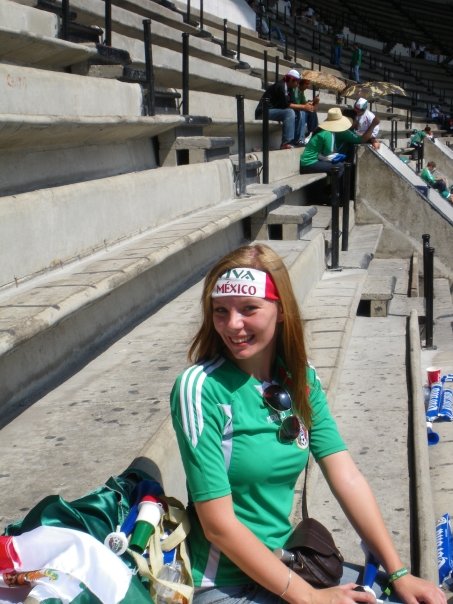 She’s got scarves on the wall of the flat. Game updates on her computer screen at work. And jerseys. She has football jerseys, y’all.

Today’s guest poster, Gina from 4-Star Life, is an English girl living in Mexico. No, it’s not a sit-com – it’s her life! Life as a football fan without the Y chromosome isn’t like that for those of us who have one.

There seems to be a fundamental difference in how the beautiful game is seen from her eyes than from mine.

Today, Gina’s here to bring those differences to light. She’s impressed me with her football knowledge. And if you read Marcia’s post recently on American football, you’ll see some parallels. (I think America has the leg up on tailgate food, honestly).

Elise asked last night, “does she write like she’s from England, dad?”

“Yeah, she does,” I said, and then I showed her where she used the word “favourite.” Give Gina a warm welcome, and be sure to check out her blog, a 4Star Life, where Gina writes about computer drama, life in Mexico and posts really cool random photos.

Footbally Differences Between Girls and Guys

Although I’ve recently taken up running, I’ve never been the sportiest of people. I do however, enjoy watching sports, although when I say sports, I mostly mean football (soccer). Living in Mexico makes it harder to follow the Premier League action from home (the UK) but I do try to as much as I can. 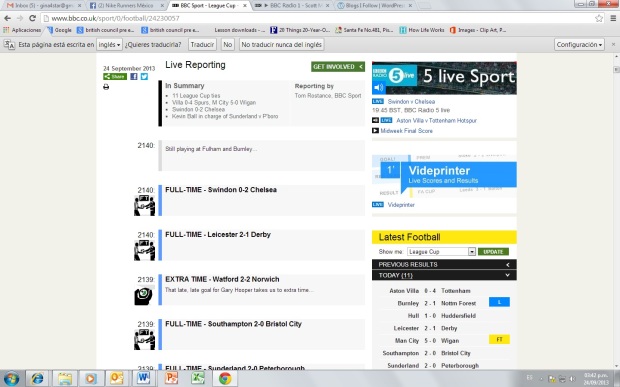 [This is a typical screen shot when I’m at work (sssh, don’t tell anyone) when there is any sort of mid-week football action going on.]

When I tell people that I like football, it is often met with a bemused smile or a raise of the eyebrows, as if to say, “Hmm, yeah right.” But football has always featured in my life and I’ve always enjoyed it. I used to get excited as a kid to see my local team, Norwich City, play.

I used to enjoy dressing up in yellow and singing along with the crowds “Come on you yellows!” As a teenager, my crushes weren’t directed at Brad Pitt, George Clooney, or even Ryan Giggs. Oh no. I had a crush on the very lovely Alan Shearer, famous for being one of England’s (and Newcastle United’s) best strikers, and after retirement, for being a football pundit.

I used to have a life-size cardboard cutout of Alan in my bedroom, and I would practice talking Geordie—the dialect of Newcastle like pet so I could be like him.

I took my little brother to see his first Arsenal match at Highbury Stadium (way before they moved to the Emirates). Before I got around to visiting any of the (pretty fabulous) art museums in Barcelona, I first made it my priority to go to the Nou Camp to see the team play, and I also took a room in a flat largely based on the pet cat, “Messi,” and the prospect of living with multinational football mad flat mates. 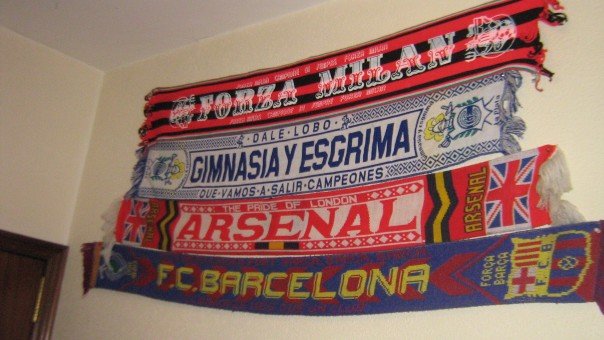 It was all friendly rivalry in the flat.

As a student in Manchester, I worked for three seasons in Manchester City’s City of Manchester Stadium (before it was renamed the Etihad). I also worked in a fan bar next to the theatre of dreams itself, Old Trafford, home to Manchester United. 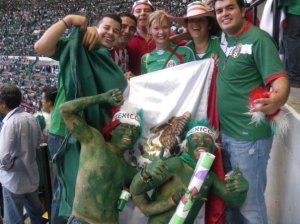 I’ve been to international games in England and Mexico: Mexico vs San Salvador in 2009 World Cup Qualifier was perhaps the best football match I have ever been to. I honestly don’t remember much about the football, but the atmosphere in the Azteca Stadium was electric when Mexico won and made it to the World Cup.

I’ve even been to a Champions League game (the Champions League is the most prestigious club competition in European football). I have been to testimonial matches and I have stood in the rain waiting to catch a glimpse of my favourite teams. 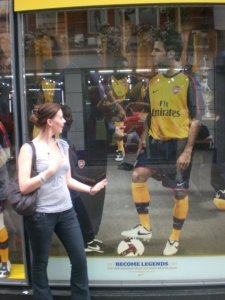 Fabregas in a shop window … I was even excited about that!

Last year on my birthday, I went to see a game here in Mexico City. Does it paint a bit of a picture? I really like football.

I know that many football loving lads, (at least my brothers, my dad, my boyfriend, and one of my best friends) will balk at this post. Gina’s “pretending” to be a football fan again. I would definitely consider myself a fan, but I think I’m in a different league (ba boom cha) to the guys.

There are a few fundamental differences between me and them. I’m not saying that this a typical male/female football fan divide, I doubt I’m typical at all, but there are some interesting footbally things that I have noticed throughout the years:

1. According to guys, you’re not allowed to support more than one team

Apparently that’s sacrilege and means that you are not a true fan at all. I disagree and I “support”/like, call it what you will, three football teams from the UK; my home team, Norwich City, who my older brother and dad support; Arsenal, who my younger brother supports; and Newcastle United, Alan Shearer’s old team.

(That’s from the UK, throw Barcelona in there please who I also “support” because I used to live there, and yes that’s a good enough reason!)

I don’t see anything wrong with sharing the love between teams… and that way the chances are I will always have something to celebrate!

2. Guys do not like going to see other teams play

It’s almost as if they feel like they’re “cheating” on their team. I personally don’t get that at all, but I’ve known guys at home in the UK to turn down FREE tickets to see their Premiership rivals purely for that fact, they are rivals.

3. Guys talk about their teams as if they are a part of them

It makes me smile when they say things like “We did it.” or “We’re having a bad season so far.” It’s as if it makes them feel part of the team. Even though they aren’t.

Mood swings go up and down depending on how a match is played, and ultimately on the result. I’ve had a friend (who knows exactly who he is) hang up on me and not speak to me for two days after I made a joke about his team (Arsenal, my team too!) losing.

Guys also take football so seriously that they have no qualms about crying over results. While they may be more discreet with their emotions in other situations, I’ve often seen guys cry tears of football happiness and sorrow. Admittedly this usually happens with the big, international matches, and being from England, we’ve had more than our fair share of crap results and dramatic exits, but I can’t think of any other everyday event where I’ve seen so many men shed tears.

I get that football can be exciting, nail-biting, even heart-breaking in the moment, but the results never really leave a lasting impression on me. Whatever I might be feeling as I’m watching, I’m over it as soon as the final whistle blows.

Guys however, hold onto the emotion which then positively or negatively affects their mood for the rest of the day/week/month/year…

Seriously, they hold onto that stuff for time and they hold football grudges. Say the name “Maradona” to any football loving English guy and see what reaction you get. They’re like elephants. Elephants who are also walking encyclopedias of football trivia.

Not only do they not forget results and emotions, they also know a hell of a lot of crap interesting facts relating to the beautiful game: What year did Arsenal make it to the Champions League final? Who was the England captain in the last World Cup? Who was Norwich City’s top goal scorer last season? Who knows!

When David Beckham was sent off against Argentina in the 1998 World Cup or when Cristiano Ronaldo’s penalty knocked England out of the 2006 World Cup in Germany (yes, I had to look up the facts), I might have been gutted in the moment, but that was then.

6. Guys can concentrate solidly for 90+ minutes on a football match, yet struggle to stay focused for ten minutes on… anything else.

7. There is absolutely no use talking to guys when they are watching football

They generally won’t listen, and if you persist, they get really quite annoyed at being interrupted. I don’t know if it’s because they cannot or will not think about anything else, but I’ve learned the hard way that there is no point trying to have any sort of conversation when the football is on.

8. Guys get angry when you don’t understand the “laws of the game”

However, I don’t feel like this hinders my enjoyment of football, that’s what the commentator is there for, no?

My Arsenal fan bro is a perfect example of this (sorry big bro, but I don’t think Norwich have come close since they unexpectedly beat German giants Bayern Munich in the early 1990s—thanks again Google).

If Arsenal are knocked out of the Champions League (which they invariably are) but there are still other English teams left in the competition (which there invariably are), he would rather a German, French, Spanish, Dutch Italian, Greek, basically ANY other team win over another English one.

10. Guys never get bored of football

As if the home leagues aren’t enough to follow, guys also spend a large chunk of their spare time following foreign leagues, playing games like FIFA, Fantasy Football, and Football Manager, and playing in local teams.

They can watch back-to-back matches without getting the slightest bit bored. Guys will get up at the crack of dawn on a weekend to go and play and they will stay out long past an acceptable hour on a weeknight. They love it. They can’t get enough.

They can have accidents and bloody knees and big purple bruises, and broken bones, and they will still come back for more.

And they can talk about it til the cows come home. Football is never boring…

Of course, all this is kind of tongue in cheek. I know that the difference between me and football-loving guys is that even though I really like and enjoy football, I am not passionate about it.

Having so many football lovers in my life though, I think it’s a good job that I’m somewhere in the middle, happy in my own form of fandom.

And whilst I can’t relate to the same level of football passion as them, I do kind of get it. Football is more than just a game for them, it’s a lifestyle. 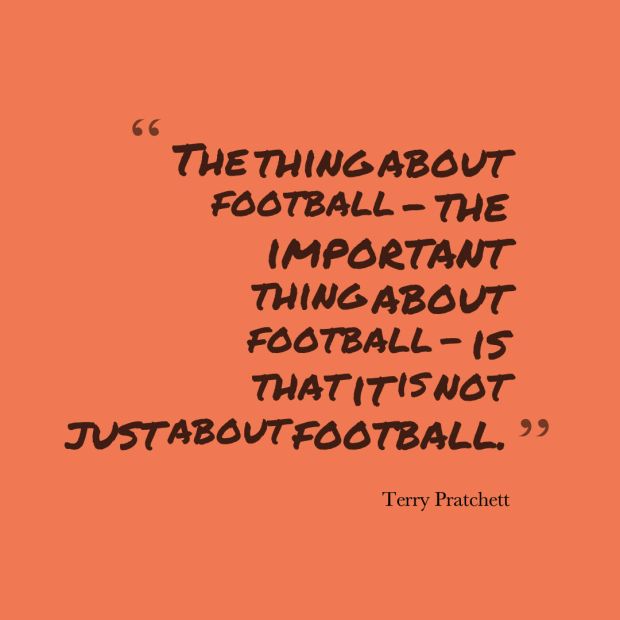