If I ever write a book about coaching, I’d like for one of my favorite bloggers ever, Michelle Nahom, to write a chapter. Or at least the forward.

Michelle, who writes the stellar blog A Dish of Daily Life, is a sports mom who gets it.

Whether it’s a discussion of safety on roads, a politically incorrect view on participatory trophies, or good sportsmanship, Michelle knows her way around the other sideline. I wish all my soccer parents could take a class from Michelle.

Today, she’s here with a simple theme – it’s only a game. Look, I want to win every match we play in. I have designs on Marie’s team winning a championship next Monday – on my birthday. We coach to win.

But we also have to acknowledge that winning isn’t only what’s done on Saturday mornings: It’s how we prepare our kids for life, by checking our tempers and keeping the game in perspective.

I like for my kid’s teams to win as much as the next parent. But someone has to lose. And honestly, losing is not the end of the world. As someone very wise (our friend Eli) said not too long ago, “It’s only a game. It’s not life or death.” But when winning becomes more important than the game, when fair play goes out the window, we’re doing our kids a disservice. We’re sending the wrong message, and it gets harder and harder to undo the damage. 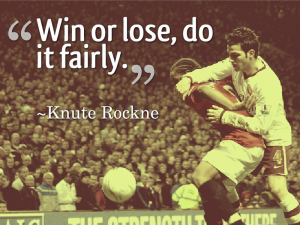 We taught our kids to play nice in the sandbox when they were little.

Why does this same concept so often go out the window on the sports field? Over the years, I’ve seen plenty of bad sportsmanship on the field. When my oldest son was playing travel soccer, I heard a man yell at his son to “take that kid out.”

I wonder if he thought about the fact that “that kid” was someone else’s child?

A few years back, I saw a group of girls from an 11-year old girls team turn and flip off the crowd after a loss that eliminated them from the tournament. Last season I watched as a player on the opposing team hit my daughter twice in the back during a soccer game after my daughter shielded a ball going out of bounds, and then headed to the sidelines to do a throw in.

My daughter was stunned more than hurt, but that’s not the point.

The girl was given a red card and ejected from the game, but I heard from a parent on the opposing team weeks later that the coach spoke to the referee afterwards and convinced him to rescind the red card.

I don’t know if it was true or not (but the parent had no reason to lie to me…I would never have known).

If it was true though, it makes me sad more than anything. One, that player just learned she can get away with things…someone will “take care of it” it for her. Two, the next time, she might go a little further.

Personally, if it was my kid, I’d want her to take responsibility for her actions and live with the punishment.

Kids make mistakes. But if we use it as a teaching moment, they learn from them. The problem lies when we don’t use these moments to teach. If you’re a soccer fan, maybe you remember the 2009 Mountain West conference semifinal between New Mexico and Brigham Young.

In that game, New Mexico player Elizabeth Lambert took the term rough play to a new level, with a ponytail yank that looked like it was going to snap the other player’s neck off, among other things.

As I watched this video, I thought to myself, “why did her coach not pull her from the game?” Is winning so important that we’ll do anything to try to get an advantage? And why did the referee allow this kind of dangerous play on the field?

When you see this kind of violence on the field, chances are it started out on a much smaller level.

The athlete gets away with it…so they push the envelope a little more. What can we do? We, as parents, coaches, and referees, have the ability to stop poor sportsmanship in its tracks at the very beginning, before it escalates to a more serious level.

Have a no-tolerance policy. Sub out players that you see behaving poorly on the field. Even if the kid is the best player on your team, you’re sending the wrong message when you allow it to continue.

Don’t tolerate poor sportsmanship from your kids. And that means don’t model it by yelling at the coach, referees, players on the other team, or even your own kid! Don’t interfere and try to “fix” things for them.

Learning the hard way is often a wake up call. It really is that easy.

It’s not always about winning. Sometimes it’s just about teaching our kids how to be good people.

Michelle Nahom – Social media marketing, photo management specialist, lifestyle blogger. She loves sports photography, running and the outdoors. She’s a mom of 3 and her family includes 7 furry creatures as well. Follow her on Google Plus and Twitter.