Sometimes, you don’t choose your team.

Your team chooses you.

Elise’s first season in youth soccer came and went with much chaos and discord. The coach of the Red Raptors had two kids – younger than 6 – on the roster. She spent more time yelling at them than teaching.

The next year, a mom and I said, ‘what the hell? We got this.’ So we volunteered.

My life has never been the same. I don’t know whatever happened to Sue, my co-coach, but I’ve been at this crazy gig for 11 years now. That’s roughly the time it takes an East Carolina student to finish undergrad studies.

Today’s guest poster, Melissa Swedoski, writes Home on Deranged. You can guess her take on the gig, too. She’s also a ‘volunteer’ coach. I got all excited when she got the sentence – um, assignment. You know, fresh blood and all.

Welcome Melissa to the CD today. And be sure to check out her blog when you’re done. She does some cool giveaways, swaps the occasional Ask Away Friday questions with friends, and takes on the world of toddlers.

She’s a wonderful writer and a loyal commenter. I’m honored to include her in my family of writers. 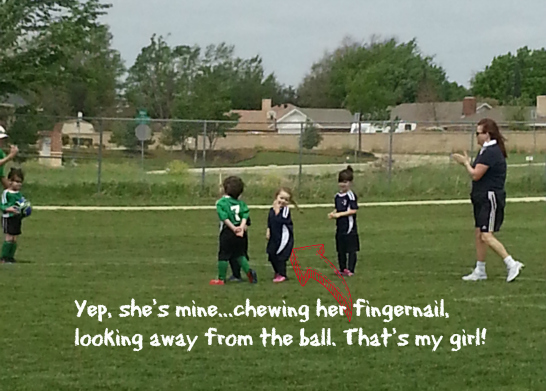 There’s a lot of big dreamers out there, hoping to be the next great one. Whether it’s hockey, soccer, basketball, baseball, tennis, golf, football….damn, we Americans love our sports. Sometimes, we love a little too hard.

Having been a girls soccer referee and coach in my college days, my husband had to rely on me in this choice. He’s from more of a football-baseball-what the heck do girls play, anyway? kind of background.

So we signed up at our local YMCA. I checked the “willing to assistant coach” box, thinking I could handle being second in command. Just requires running a few drills and making the phone calls, right?

Two plaintive phone calls from the Sports Coordinator later, and I officially became Coach Melissa, head of the Mighty Strikers 4-and-under team. Which is to say, I got my badge to be a cat herder.

First practice: 6 of the 8 showed up. Not bad. One boy had played before. One boy wouldn’t stay on the field. One girl started out shy then became a 90mph chatterbox. One boy sent my husband’s blood pressure skyrocketing. One boy loved his ball and refused to use any other.

Then there was my sweet baby girl. Who thought the whole experience was fun. So long as she didn’t have to do actual drills. Because, why? Then there was her almost 2 year old sister, who refused to leave my side, causing me to carry her around the field.

As we got in the car, my husband turned to me and said, “That went a lot better than I thought it would. I was sure it was going to be a complete disaster.” Um….thanks?

Practices 2 and 3 were the same, and then opening day. We were slated for a double header, with back-t0-back games. Apparently, Mother Nature did not get that memo. It was around 45 degrees, gusty winds and occasional mist. Just the kind of weather that 3 and 4 year olds (don’t) love. We lost one and won one, but it was hard on all.

Two kids quit after that. Not really shocking. Then came the third game last Saturday. Only four were there, but they were excited. It was in the 60s, but still very windy. And the team we played – the Titans – had one little man who I swear has already played professional soccer. He could move to the outside swiftly, and in this age range, that’s a pretty big deal. We lost.

Hard on the kids? Yes. Hard on me? Yes. Hard on the parents? Sort of. Quite frankly, the other team’s kids looked almost as demoralized as ours did, since they didn’t really get to play either. It was a heartbreaking lesson that I’m not sure should be taught at this age.

Winning is addictive. Am I too soft-hearted? Yep. Am I too competitive? Absolutely. But seeing those faces last Saturday showed me, loving the kids a little too hard – that’s always a win. Go Mighty Strikers!

About the Author
After a career as a newspaper reporter and editor, Melissa Swedoski thought she was well informed on the chaos of everyday life. Then she married a man 13 years her junior and later became a SAHM to two toddler girls. Now, she’s mumbling through the mayhem of marriage and motherhood in a small Texas town, turning her investigative eye on the mishaps and misadventures of parenting and the marathon that is marriage, always with the emphasis on humor and love. You can find her living her big little life at Home on Deranged.