How much do you remember from your first birthday?

I’ll venture it’s about as much as I retained from the commencement speech at my high school graduation. That first birthday is for the parents, but it’s important. Especially for your first kid. Milestone, reached. That’s not so vain.

Ashley from The Confessions of a Working Mum brought me back  with her post about the plan for her daughter’s first birthday.

So the bugger can sit up and her head is finally of equal weight to the rest of her body. She’s still a baby – and one that won’t remember this day.

She’ll see the pictures, though. And get a sense for how lucky she is to grow up around so much love.

Here are my suggestions for that first birthday:

They’ll also see how thrilled their parents were that day. It’s just the first milestone in a journey loaded with miles, and that contains a few stones.

Let’s cut the cake. And by cut the cake, I mean answer some questions. (Unless someone brought cake. In that case, I call dibs on a corner slab).

Oh yeah: The Huffington Post asked me to pick my ideal Father’s Day gift. Hint: It had nothing to do with pizza or Jules Day. Check it out.

Oh yeah, part II: I’m on What The Flicka today, too. Read about the three movie dads I’d like to share a pizza with. Check this out, too.

1. Where do school buses get their gas?

From school lunches. Oh. That’s where the kids get it.

Most school systems have their own diesel gas pumps for buses.

Lately, some have switched to propane. It’s cleaner and greener. And it’s what we grill with.

Diesel is … you know what?

This is the most boring answer I’ve ever found in the history of Coach Daddy.

So here’s a video of a kid crashing a school bus into a gas station instead.

2. Doesn’t that animal on Star Wars take like six years to poop you out?

No, that’s you – after school lunch.

But it’s not six years – it’s a thousand years. Which is what it feels like between World Cups. (And that’s only four). The sarlaac, a plant-like pit creature, lived on several planets in Star Wars. It’s 100 meters long and has tentacles and a beak.

As C-3PO announced just before Han Solo, Luke Skywalker and Chewbacca had to walk the plank into the sarlaac: “In its belly, you will find a new definition of pain and suffering as you are slowly digested over a … thousand years.”

Schaub, the former Houston Texans quarterback, left it all out on the field.

Well, his earlobe, at least.

Denver Broncos linebacker Joe Mays laid a hit so vicious in 2012 that it dislodged Schaub’s helmet and took with it a chunk of his ear.

It was impossible to locate the lobe, unlike the time Mike Tyson took a bite out of Evander Holyfield’s ear during a boxing match.

It gets worse for Schaub – this offseason, he signed with the oakland raiders.

4. Have any brothers ever played against each other in the NFL playoffs?

Not Eli and Peyton Manning. Not Eddie and Walter Payton. Not even Rocket and Missile Ismail. Jim and John Harbaugh, though, coached against each other in Super Bowl XLVII. We called it the Harbaugh Bowl.

John’s Baltimore Ravens beat Jim’s San Francisco 49ers 34-31. Baltimore shouldn’t have even been in that game. Denver allowed a last-minute BS touchdown in the AFC title game by a BS quarterback that sent the game to BS overtime for the BS Ravens to win on a field goal.

Not that I’m bitter or anything.

They do, and to some people, it’s a much more serious topic than severed ears and school-bus gas.

Of those, 1,200 sell semi-automatic weapons, as the killer in the Sandy Hook shootings used.

As recently as 2006, Walmart phased guns out of most of its stores. In 2011, Walmart added guns back after slumping sales for two consecutive quarters.

After the Sandy Hook incident, semiautomatic weapons sold out in five states for Walmart. Maybe people were afraid gun laws were about to get tougher.

I vote Republican, but I’m not that far right. I won’t dig in my heels for gun rights.

I will take a stand on things like Easter baskets with toy guns in them. That’s a place I can stand firm. Whether you believe in Jesus or not, a gun in an Easter basket just … ain’t right. It’s worse than vegetables in lasagna.

And that’s wrong anywhere. Even in your school lunch. 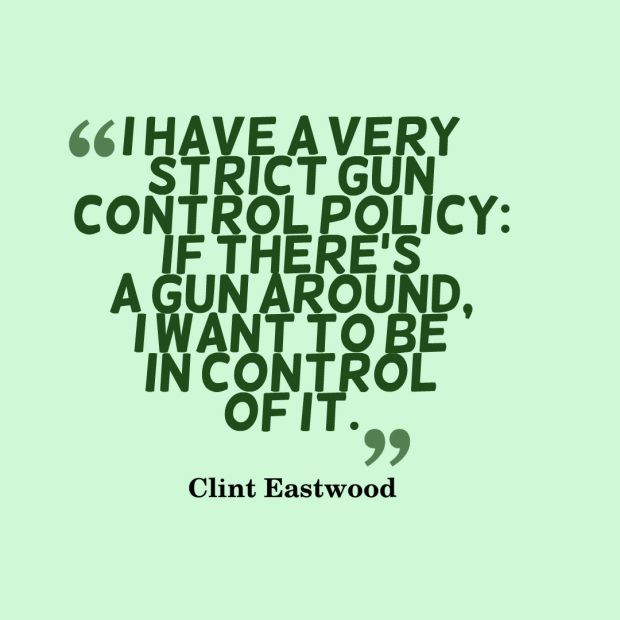