Today is Day 1 of the A to Z Challenge. And that’s not an April Fool’s joke.

A is for Adults today on the CD. To kick off the month-long challenge to cover all 26 letters by the end of April, I’ve brought in a pinch hitter. Please welcome Louise, of Baby Gates Down blog. She’s a fantastic Canadian blogger and mother of two. She’s been a friend of the CD for more than a year, first chiming in on a 6 words post, then regaling us with tales of life as the mother of kids leaving toddlerdom.

Her writing is snappy and fresh, and she’s among the very best commenters ever (as well as a regular 6 words contributor). Check out this link to learn why her blog is called Baby Gates Down in the first place. I won’t ruin the story.

I’m happy to finally have Louise guest post here. She’s a blogger, like me, with roots in journalism, but for whom parenthood has colored her words more than anything. I adore her style and appreciate her words especially for the #1000speak movement.

Please welcome Louise to the CD!

As a former competitive swimmer, lifeguard and coach, I knew I would teach my kids to swim.

My daughters are now five and two years old. My eldest can swim a few metres and my youngest happily splashes about without fear.

As for the competitive part?

Sure, when they’re a bit older I’d love them to take up my sport.

I’d be thrilled to volunteer at their (still very hypothetical) future swim meets. Both my parents became actively involved as my brother and I swam. Indeed, my father still officiates at local swim meets. I love what the sport gave me and my family as I grew up.

But getting back to my kids – because that’s what being a parent is about – I mostly want them to find activities that they enjoy and that they choose.

Growing up in and around serious competitive sport was enough to instil in me a firm drive to never become that crazy sport parent.

You know the ones.

The milder ones use to sit in stands at meets competing with other parents in a way that baffled my mother – spouting their child’s times in every event at her down to the 100th of a second and then asking for our times – which my mom consistently never knew and so wasn’t able to join in that competitive parental aspect of competitive sports.

But this mild one-upmanship pales in comparison to some of the parents I remember.

The ones whose investment, drive and dedication to their child’s success knew no limits.

I remember a mother from one of the teams we’d consistently see at provincial meets.

Until she was banned from the pool deck you couldn’t miss her.

She would storm up and down the side of the pool as her kids swam, pushing past stroke & turn judges and plowing over coaches and other onlookers to cheer her kids on by screaming her support.

Then there was the girl whose father use to wake her up an extra 45 minutes early before 6:00 am morning practices, so she could get some additional land training in.

Or the boy whose mother got interviewed for a television news piece about a recently hired coach who had faced sexual harassment allegations involving teenage girls from his previous club who somehow managed to make the focus of her interview the fact that her son might be the next Olympian.

And the girl who spent her eleventh birthday in tears because she was “aging up” and it would be harder to win everything – which her parents expected.

I also remember my parents increasing mix of amusement and frustration at the father who dominated club board meetings with ever increasingly spectacular tales of the swim triumphs of his youth – getting better and better as his kid improved so as to retroactively keep up in a fabulous example of:

The older I get,

The better I was.

Finally, there was the girl who wanted to go to her grad.

But it fell on the same night as the finals for regionals and she was seeded first going into her event.

Both her parents and coach told her she had to “take one for the team”, rather than go to the dance.

She promptly false-started, got herself disqualified, and after a delightful screaming match with the coach stormed off to the change room and after that (I’ve always hoped) to the dance to take back her night and enjoy a bit of teenage normalcy.

It’s been over 20 years since all those examples, but I clearly remember each of them. The expectations and pressures those parents were putting on their kids and the fact that this was as much about them as their children, was clear to me even then. 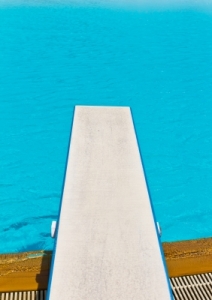 I was forever grateful that my parents encouraged me and expected me to do my best, without going off the deep end in their quest to ensure our collective family awesomeness.

I vowed never to be that parent.

And while it’s still early days, and we haven’t hit competitive anything yet, I can already see where sometimes knowing when to push and when to sit back, isn’t always crystal clear.

I’ll certainly never become the parent whose kid cries when they age up or the mother that tells my child she’ll have to skip prom to prove her commitment, but I appreciate the grey zone that exists between encouraging my kid to push themselves a little harder to achieve something I know they are capable of doing, and pushing them too far.

I also work hard not to overly steer my kids just into the activities I like. Sure, they swim. But they also dance, have done music, tried soccer, and gymnastics, and we are probably signing up for tee-ball this summer.

So far, I think I’m managing to encourage rather than push.

And when I catch myself trying to drill my two-year-old on star floats or pushing her just a bit too hard to try swimming with the floaties on her own, I have the memory of swim parents past to pull me back in line.

Photo credits: The “Swimming is a Sport” quote was found on Pinterest and links to the source. All other photos are courtesy of FreeDigitalPhotos.net. The woman swimming fly is by arztsamui, the dancers are courtesy of Stuart Miles and the diving board is by tungphoto.