Just the other night, I implored the boys I coach to “play like girls.”

“Wah Wah WAH!!!” one boy responded immediately. It’s not what I meant. I meant they should not fall to the turf every time the ball hits them at more than .25 MPH. That they should lift up their teammates when they make mistakes.That they should fight like hell, whether they’re up 8-3 or down 8-3.

It was an accidental commentary on the condition of gender in 2015.

This is the first boys’ team I’ve coached. It’s always been girls or coed. I have lofty expectations for the lads. I need them to channel their inner Carly Lloyds and Abby Wambach. I need them to keep like Hope and sweep like JJ.

Girls can take the boys’ soccer ball and beat them with it, then go home and drink chocolate milk, like Kelley O’Hara.

But now, even in 2015, it’s rare for a woman to propose. It’s considered the man’s job. It’s a phenomenon called benevolent sexism, and it casts a very broad swath over male behavior.

At work, if I’m in a crowded conference room when a woman comes in, the training my dad gave me tells me to stand up and offer it to her. I’ll hold a door for a woman and let her go first; if it’s a guy coming, I’ll just hold it for him to take. And I won’t stop doing it, either.

So today, mostly it’s the guys doing the proposing. If it’s that important in society for that to change, it will. Until then … take my seat, I insist.

2. Why didn’t our cats have kittens? 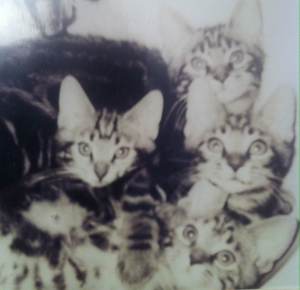 Despite them being siblings, and isolated from outside suitors, our cats were also spayed and neutered.

Plus, four was plenty. When they fit into the sink all together, they’re cute. When they struggle to clean themselves after a trip to the litterbox, they’re much less than cute. It’s hard to believe that 13 years ago, they were four pathetic fur balls on the side of the road I rescued from hungry owls.

3. How does that piano work in McDonald’s at Southpark?

Like a double-decker bus in London or the two-story Wendy’s in Boone, the McDonald’s at Southpark is that place kids love to go.

Not only can you sit upstairs in a McDonald’s – a stinking McDonald’s! – there’s a magical piano in the lobby that plays by itself. It’s called a player piano. Self-playing instruments have been around since the second century. That’s like, the last time the oakland raiders made the playoffs.

4. Do cigarettes come in round tin containers?

No, but what if cigarettes were ring-shaped, so smokers couldn’t ever find the end to light up and maybe they’d never light up?

You’re right. They’d still buy those stinky vapor cigs. What you found, Grace, was a tobacco container. Tobacco sellers first started to print on tin in 1875. I found a Red Indian roly poly brownie tobacco tin, circa 1912, with a top bid of $312! That’s roughly the cost of a box of cigarettes today.

I’ve never smoked, but I did try something called Skoal Bandits. They were nasty little pouches of tobacco that you stuck between your cheek and gum. We thought we were badass kids (maybe 13? 14?) sucking on tobacco pouches and playing football, until we got a little green around the gills.

I spit mine out when I saw Scott Francis loose his lunch in the neighbor’s hedges.

5. What war was grandpa in?

Your grandfather served in the Vietnam War, driving cargo planes into hostile territory.

My dad got drafted – but never served. It’s a cool story.

Dad said he received a draft notice by mail. He was to report to the train station in town at 8 a.m. on a Saturday. My dad packed a duffle and rode with his dad to report for service. When the officer called out all names to board, my dad’s wasn’t included.

Again, all the draftees got called, one at a time, except for my dad.

“You’re not on the list,” the officer told my dad.

The hell I will, my dad thought. You can come get me if you want me that bad.

That was kind of the first chapter in my story, too, I guess.