My buddy, Laurie, left for a walkabout a while back.

He wrote a guest post, one of my highest-clicked posts ever. Laurie wrote about what he’d bring to a barbecue at my place. That’s the fun stuff. He’s been out of the blogging asylum for a while.

He’s stepped away, and I can’t wait for him to come back again.

Laurie – Fratello to some – knows me. It’d be great to touch base with a guy I consider the big brother I never had, get all caught up and get a little insight.

He writes The Adventures of Writing, and also takes pictures. Tons of pictures, really good ones, too. You might have known him from our banter that lasted comments and comments after some posts.

When I saw the kookaburra question, I thought of Laurie’s photography.

He takes photos of the wildlife in his yard. I swear, it’s like another world. Not just because there are kangaroos roaming about. The birds. They’re almost … Seussian. Check it out.

See, there’s a list. Of gay birds. About 130, in fact. I looked for the kookaburra, a badass Australian kingfisher. He’s missing. He’d have been there, between Kittiwake and the Laughing Gull. Scientists discovered that as many as 130 bird species engage in homosexual behavior.

The kookaburra is unique in that he has a song written about him. That’s where they say he’s gay, but it’s a different kind of gay. This gay means “lighthearted and carefree.” I like that definition.

It makes me believe Kurt Cobain when he wrote: “what else can I say?/everyone is gay.”

It’s known as speed stacking. It passes the litmus test of sports, in that you cannot speed stack while drinking or smoking. (Sorry, PGA and PBA.)

Competitive eating qualifies as a sport. Should speed stacking? They award a cup for it, which is funny if you think about it. You stack cups to win a cup, but only if you’re the best. It’s legit, though.

I have a tough enough time balancing a cup of soda and a handful of gingersnaps. If you can do this, you’re a sportsman. 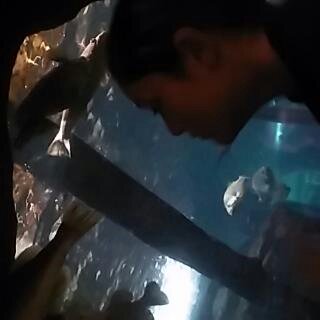 3. Why do you take pictures of us all the time?

I love you guys.

There are times and spots in my days and even at night when I think of you. I think of something we’ve done while I’m driving or sleeping or working. I’ll miss you right then, especially. I can pick up my phone and flip through and have a look at you.

Sometimes, yes, those pictures end up on the blog.

See, I want every moment with you. It’s hard when we’re together, but not. I know you have your thoughts and lives and moments and devices. And it’s okay. Because in those moments I’m missing you, you’re right there on my phone.

Holding a trophy or a huge fish or each other – sometimes in wrestling holds.

I’ve always kept totems of you guys. Little physical elements I could keep in a pocket or on my desk, a touchstone to feel connected to you. You kids are of me, but not from me, as you are from your mom.

A dad feels his kids are an extension without that tether that binds them to their mom.

It could be a cross made of wire and beads. A coin from Santa, gifted to me. A favorite plush tiny rabbit, the one you used to hold around the neck, Elise. I kept that in my pocket for a while.

Problem is, I lose your totems.

Sometimes, beside my car chair, or sometimes, it’s returned to the earth for good. I’ve always wanted … a necklace. Something close to my heart, something that is all three of you, a totem for my girls.

Maybe one that you have, too.

You’re like me, in that sometimes the gifts you get find their way back to the earth before its time. So who knows how long it would last? With the pictures on my phone, at any time, anywhere, I can hold you.

4. How do you pick a good avocado?

There’s a technique, handed down from generation to generation. It’s a family secret, originated in the times of the conquistadors.* It’s by feel. I see people poking around the avocados like they’re buttons in a slow elevator.

You’ve got to cradle the avocado in the palm of your hand. You want to squeeze the avocado, but not with your fingertips. Nothing’s worse than a bruised avocado. Or a dad who takes too many cellphone pics of his kids.

Anyway, the avocado should give a little to your squeeze.

Not a lot. If it feels had as a stormtrooper helmet, give it some time. If it mushes in your hand like a jawa’s face, it’s too far gone. Or, typed a search on it into a browser window in 2015. Either/or.

5. Why does it always rain when someone dies in a movie?

I took a course on this kind of stuff in college.

It’s fascinating stuff, symbolism in film. The way a camera view of a literal crossroads means a virtual one, too. Or how a character can appear framed by a window, to represent some form of confinement of spirit or mind.

Or how a character never wears bright colors or always does.

Those views that span from close-up too far away, especially aerial views, depicting a character as a small cog in a worldly machine. And sometimes it’s purely for mood and effect, like the baseball movie going to the bottom of the ninth always.

Or the guy busting into the church just as the bride is about to say I do.

Theatrical timing, and wouldn’t it be a sucky movie if it wasn’t like that?