I might act curmudgeonly at times, but really, I can roll with the punches. I finally got a smartphone, remember? I fully embraced Star Wars: The Force Awakens, and gave Fuller House a puncher’s chance (Hi Kimmy.) Agile, that’s what I am.

Still, there’s stuff I miss. Stuff I wish I could bring back.

Like, Summer Sanders. Toys in the bottom of cereal boxes. Ice cream in baseball caps at the ballpark that don’t set you back $8. Cookie Monster, in his full glory. The original Electric Company. The Gameboy. Trading football cards with Tandy Dillen at lunch.

Blockbuster on a Friday night. Belinda Carlisle. Woody Woodpecker. Maddie Hayes, on Moonlighting. Walking home from school. Making shadows on the screen when the movie ended in class. Plotting your walk to class to cross paths with a crush.

Trapper Keepers and O-pee-chee folders. Abuela’s tortillas. Yearbook day. My sunglasses collection. Atari games. Sabrina the Teenage Witch. Talking on the phone all night when your parents had no clue. Clue, the movie and the game. Operation. Congress doing stuff.

Everything shaped like a dinosaur, from soap to toys to cookie cutters. Playing football in the street, in the cold, at night, under the lights, and pretending we were Ken Anderson, Reggie Rucker and Dwight Clark. Moving in slow motion like we were on NFL Films.

I wish I could bring back the 60 minutes I spent reveling in yesterday to start this post!

1. Are they still cloning a mammoth?

Kind of, according to LiveScience.com.

Scientists broke down the ice-age beast’s genome, the whole gene set, on the mammoth, the Pleistocene giant and close cousin to the modern elephant. They found traits to help the prehistoric pachyderms survive sub-zero climes.

It’s not exactly mad science. First, a hybrid of the mammoth and African elephant is on the docket. They’ll give him lots of fur, that slopey back and other signature features, like heat-trapping fur, which could come in handy when you live in North Florida and consider 65 a cold snap.

We could do it, girls, in your lifetime. Should we? Selfishly, I’m imagining a ground-chuck mammoth burger on a Kaiser with Havarti cheese and a touch of soy sauce.

2. If cigarettes are bad for you, why are they made?

When we were kids, I thought government saw everything.

I imagined a surveillance center near the earth’s core that would document all bad behavior, from twerking to smoking pot to booing Hopey Solo. God could run it, with a few of the Greek and Roman gods and goddesses in leadership positions, reporting to Santa Claus and the Easter Bunny.

Smoking, undoubtedly, causes cancer. It rips slowly and steadily at our health. It strains the world of health insurance and makes your hair really stinky if you stand next to someone who does it (imagine what it does to their mouth).

The government should not at all prohibit its manufacture.

To smoke remains a free choice. Not so free, with skyrocketing taxes on cigs. But it’s a right, just as you’ve a right to eat saturated fat or root for the raiders. Neither God nor country should take that away.

I can hope, however, for fewer smokers in each generation. Eventually, it’ll go to the mammoth. Without a chance of cloning.

3. Do you have a crush on Sofia Vergara?

That goofy grin on my face during her hair-product commercial – is that what brought it on? No doubt Sofia, a Columbian-American actress known for her role in Modern Family qualifies as crush worthy, she doesn’t currently rank on the Coach Daddy Top 25 poll.

I might have been reminiscing about my pizza lunch or the Denver Broncos’ run through both the Pittsburgh Steelers and New England Patriots to a Super Bowl title. Heck I could have been thinking about disc golf or Havarti cheese on mammoth burgers.

The pop’s in the wood.

It’s a chemical reaction between oxygen and a fuel source, such as wood or a Detroit Police squad car after the red wings win a championship (boy, it’s been a while.) Every burnable substance has an ignition temperature. When that’s reached, you get combustion – about 300 degrees for wood.

When the temperature hits 500 degrees, the split hits the fan on a molecular level. Pockets of sap and water in the wood boil. It’s like a pot on the stove with a lid, though. The steam has nowhere to go. The popping you hear comes from the wood splitting open to release steam into the fire.

Toss a wet log on the fire and get ready for the fireworks.*

He used to. And because Pittsburgh hasn’t been much of a nuisance to my Broncos since, oh, probably the Terry Bradshaw days, that’s all right.

Allow me to speak well of the man who played for that silly team with stickers on only one side of their helmets. Hines Ward, a Georgia alumnus, played old-school football. Hard-hitting, hard-working. He could have played for the Broncos with that kind of moxie.

Hines works with charities and as a studio analyst for NFL games. Class act. In fact, I want to share a link to his charity here. I don’t like the steelers. At all. The best part of a hate-hate relationship with a rival? Next to beating them on the way to the Super Bowl, it’s acknowledging them for the good they do. 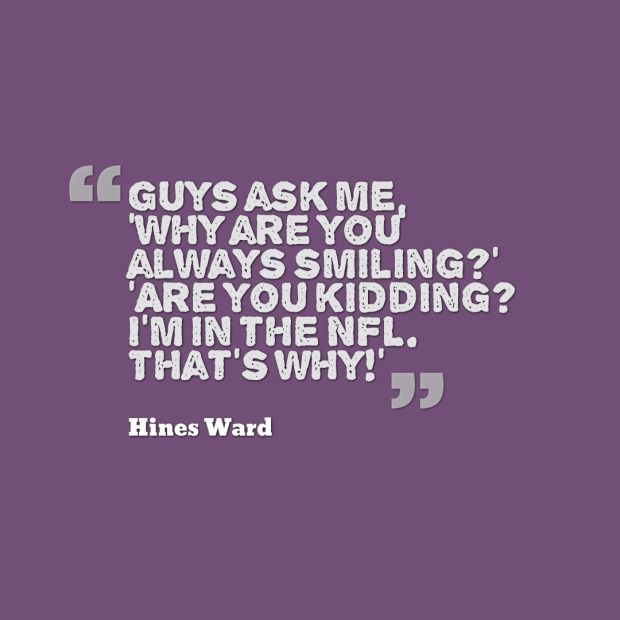