So, this A to Z Challenge really kicked my butt. It happened in the home stretch of soccer season. It fell during a time we stressed over Elise’s college status (she got in!) and lots of work workload. Spring’s a time of renewal, too. Although it’s mostly pollen.

As readers might remember, when I have a guest-post Wednesday without any guest posts, I turn to my phone. I pick 11 random pics and share them here. Let me know what you think. I promise to have something from an awesome guest next week.

I love to take my girls to work with me. The three joined me at Red Ventures on a Saturday, watching sports, playing pool, bowling, etc. This is Grace looking something up online. To her, it was all that, and a bag of chips. (Really. Look by her hand.) 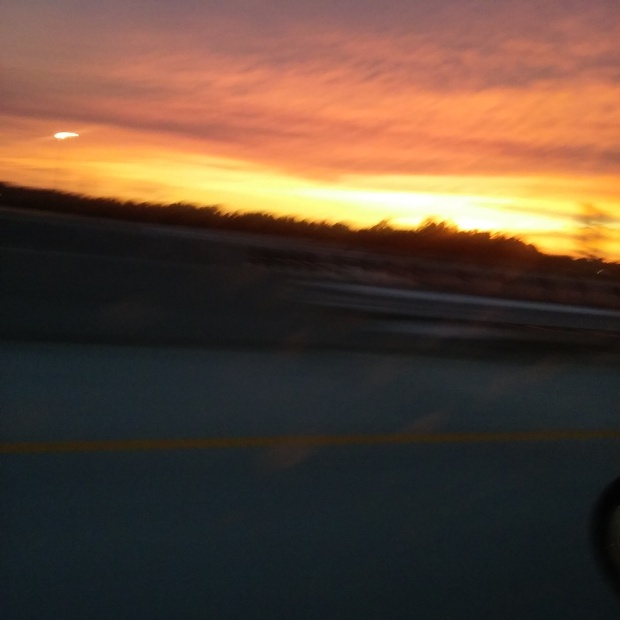 It’s not advisable to take a photo on your smartphone while your Pontiac screams along at 70 mph. It was a beautiful morning after a dark night, and the light seemed custom-made for me. To capture it would be the least I could do.

Standard grub at your regular-season Carolina Panthers game. Sometimes, the main course is a roast beast, so you load up on, clockwise from top left, a Krispy Kreme, some garlic bread, pasta with veggies, and salad with ranch dressing. 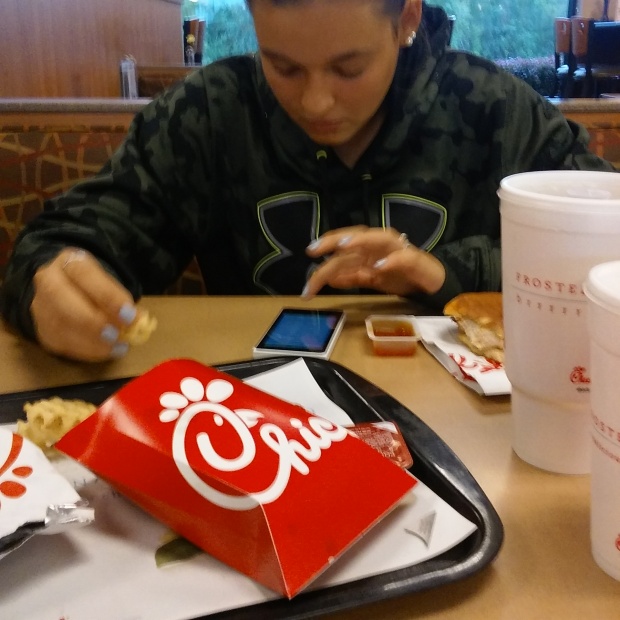 Before Madison fell in love with Warren Wilson College, we visited Nova Southeastern. We raced against a major storm on the way south that would devastate Columbia, S.C., with flooding. On Day One, it was just a rainy day and Chick-fil-A.

From the same trip to Ft. Lauderdale, Fla. By this time, we’d talked about how Nova Southeastern wasn’t a fit. We were about to leave and visit Stetson University. But first, a morning walk on Pompano Beach. 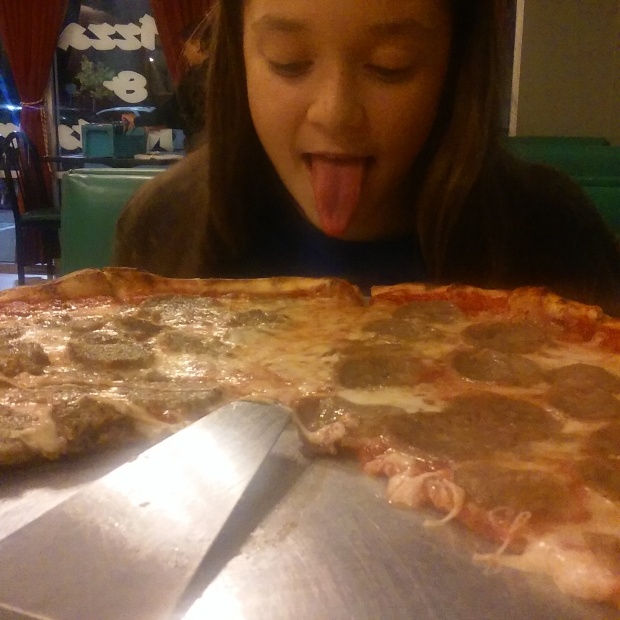 Oh, food. This is Camdyn, worshiping at the shrine of pizza. I can’t remember the name of the place, but the pie was good. Grace requested meatball pizza, because she’d never had it. We managed our Friday pizza tradition on the road for a soccer tournament. 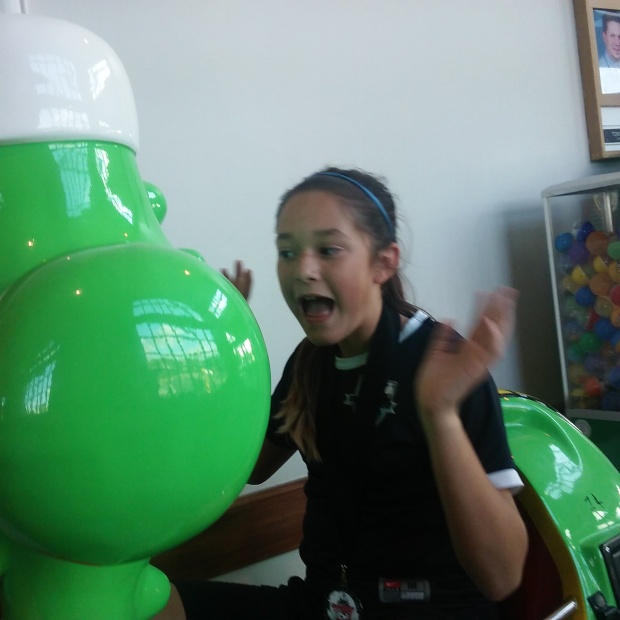 Second-place medals aren’t Camdyn’s favorite, but I’m awfully proud when she plays, medal or not. We stopped off after that tournament final (she’s still in uniform) at Harris-Teeter. Never too old to ride a dragon, apparently. 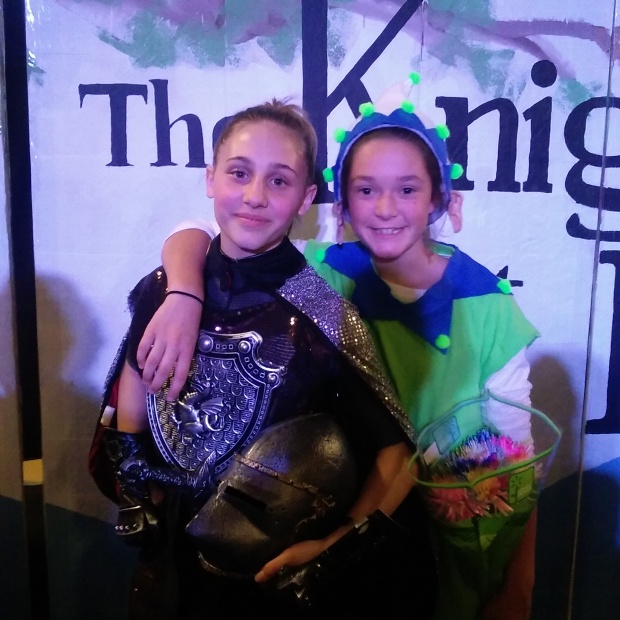 Camdyn and her friend after a showing of Knight at Dawn, a theatrical take on the Magic Treehouse book of the same name. After a performance, I love to bring my girls flowers – even ugly ones. 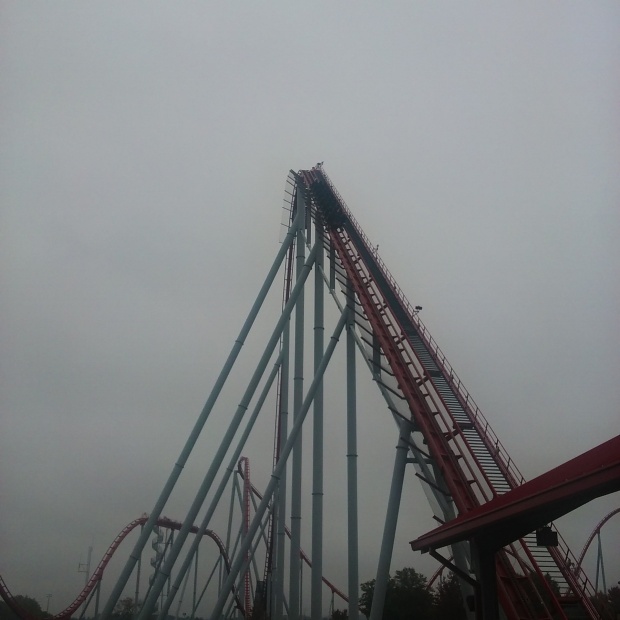 I got tickets from work to visit Carowinds theme park. Camdyn had never been. She boarded this monstrosity, called The Intimidator. It’s visible on I-77 – 5 miles away. As the ride began, Madison turned to Camdyn. “This is your first rollercoaster, isn’t it?”

Yep. That’s Green Bay Packers quarterback Aaron Rodgers. My girls love the guy. He’s a fantasy keeper, of course. On this day, though, he fielded questions about why he tossed a Microsoft Surface after reviewing a late-game mishap. 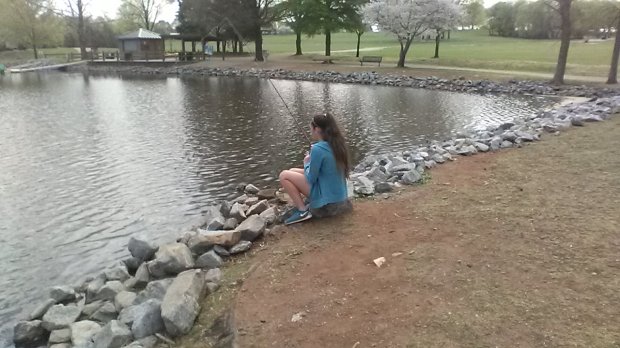 Finally – Hayden! I chose these photos at random but held out for this last one to be of her. She, Camdyn and I totally got skunked at Frank Liske Park that day. But we did wind up with a big package of off-brand Oreos. Life was good.